Ngāti Rangitihi signs Deed of Settlement with the Crown 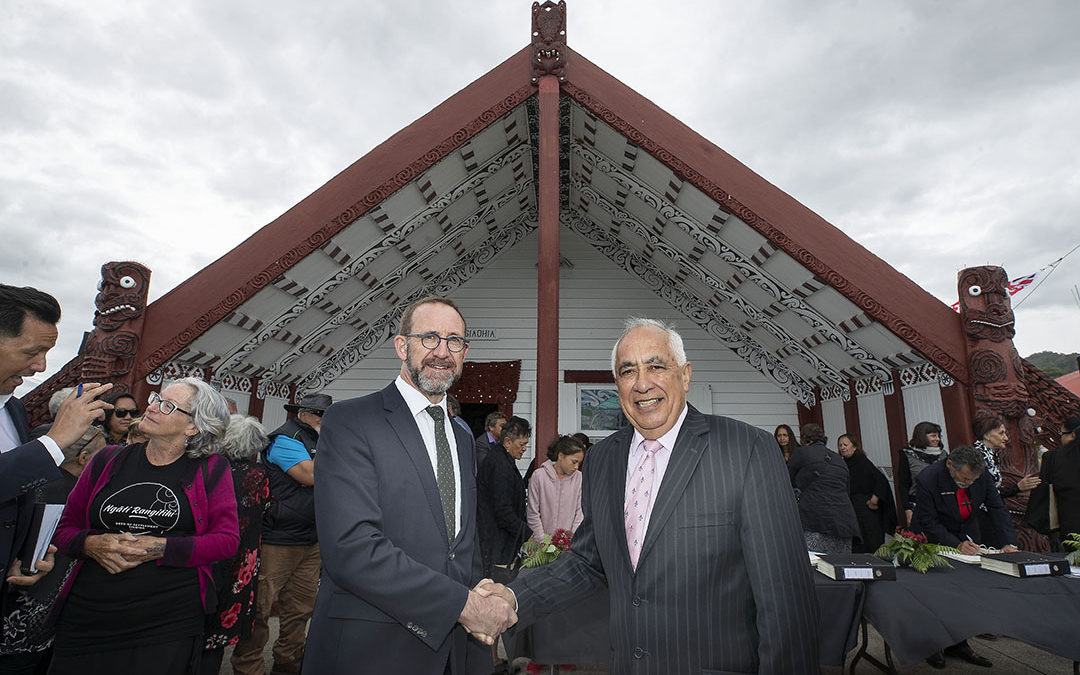 Check out the highlights reel here or the full video below.

The signing follows approval by 91.79% of Iwi members who voted for the negotiated settlement package in August 2020.

“No settlement will ever be able to compensate for the mamae (hurt) our people suffered, but today represents the beginning of a new era where we can achieve our cultural, environmental, social and economic aspirations for Ngāti Rangitihi,” says Mr Comer.

“We are hopeful for what the future holds for our people and we look forward to strengthening our relationship with the Crown.”

The Deed of Settlement includes an Historic Account, Crown Acknowledgements of how and when it breached Te Tiriti, and the Crown’s Apology. It includes the return of culturally significant lands, relationship agreements with Government agencies, the set-up of an entity to restore and protect the mauri of Tarawera Awa and Te Awa o Te Atua (with $500,000 of funding), and Financial Redress of $11.3 million. Te Mana will receive $4 million plus interest, in addition to the interest in forest lands valued at $7.3 million that were part of the 2008 Central North Island Forest Lands Collective Settlement (CNI).

“This settlement acknowledges we are the rightful owners of our whenua and awa,” says Mr Comer.

The Deed of Settlement also enables enduring relationships with neighbouring iwi, including Tūhourangi, Ngāti Awa and Ngāti Tūwharetoa (Bay of Plenty), as Ngāti Rangitihi Iwi move forward into the future.

Mr Comer says this Settlement reflects the tireless work done by many within Ngāti Rangitihi to get to this point.

“It is an incredible honour today to be able to gather here to sign our Deed of Settlement — a settlement that is for our tamariki and mokopuna, but also for those who started this haerenga before us.

“As a Trust, we have been in direct negotiations with the Crown since 2015, but our journey started well before this. We pay tribute to all Ngāti Rangitihi claimants who submitted Waitangi Tribunal claims for historical Te Tiriti o Waitangi breaches by the Crown, some of who are no longer with us today,” says Mr Comer.

“We also acknowledge the work of our negotiators who stood firm by their commitment to achieve the best settlement they could for our Iwi, and we thank all Ngāti Rangitihi whānau for their overwhelming support of this settlement.”

Following today’s ceremony, the Settlement will be progressed through Parliament over the course of 2021. Once the Bill becomes law, Te Mana, as the approved Post-Settlement Governance Entity, will receive the settlement redress.

“Now that we have got this settlement across the line, we will be developing a new, future-focussed strategic plan for the Trust. This will incorporate key social, cultural and economic developments that we will be rolling out over the coming years to benefit all Ngāti Rangitihi descendants.”

Mr Comer says elections for new Trustees will also be held over the coming year.

“We encourage our people, especially our rangatahi, to put their hands up and be part of moving the Trust forward into the future.

A copy of the Deed of Settlement is available at www.govt.nz/treaty-settlement-documents/ngati-rangitihi/.