This month we hear from two Ngāti Rangitihi rangatahi who have benefitted from our Charitable Trust Sports Grants: Campbell and Oliver Forsyth. Read on to hear about their successes in volleyball and how the grants from the Charitable Trust have helped out over the past few months.

“Thank you so much to the Charitable Trust for the Sports Grant! I really appreciate the grant being able to help my parents send me and my brother to the IPC Champs in Wellington this year.

I started playing volleyball when I was a Year 9 at Whakatāne High School after some of my mates said I should come along to their training. I went and absolutely loved it!  I played for our Junior team for the next two years, before playing in the Senior team when I was Year 10. In 2019, I was super stoked to be selected as part of the NZ Junior Beach Volleyball team and travelled to America to play. I was also picked up at the IPC tournament that year to be a part of the NZ Junior development team that travelled to Canberra, Australia. This was the start of my involvement with Volleyball NZ and I am proud to say I have been a part of the NZ Beach and Indoor Volleyball teams since.

In Year 12, I moved to Trident High School. I was gutted when the National School Champs were cancelled in 2020 due to COVID-19. However, this gave us another year to prepare for the 2021 Nationals. We ended up finishing 2nd, a placing we were a little disappointed with. I was gutted not to win, but was happy to be named in the tournament team as a stand out player.

I was excited to go to Wellington for this year’s IPC National’s as our Bay of Plenty team was a team of well known, NZ representative players. There was a lot of pressure on us, as everyone expected us to win. This wasn’t to be the case thought, as we lost one of our pool games that we could not recover from. We ended up finishing 5th which I was really disappointed with. However, I must have played well as I was selected to be a part of the first ever National Volleyball League in NZ. This was a tournament designed for the top 48 athletes in New Zealand. To be selected is major and is definitely a highlight for me. I was a part of the Southern Pounamu team which won the tournament, so that was very cool.

Like Ollie, I am now playing in the East Coast Old Boys team for the National Club competition. I will also be attending the NZ Māori camp in the school holidays.”

“Thank you so much for the funding grant from the Charitable Trust!  I know the money really helped in getting me to wellington to play in the National Regional Volleyball Tournament over Queen’s Birthday weekend.

I started playing volleyball two years ago after seeing my brother Cam play and thinking, “wow, what a cool game!” I have won the NZ Secondary School Beach Volleyball title for the past two years, something I am super proud of. I was also part of my School Junior Indoor team that finished second at Nationals in 2019 and have also played in my school’s Senior team since I was Year 9.

I was super excited to go to Wellington for this year’s Nationals as our Bay of Plenty team finished 2nd in the U15 tournament last year and we were determined to try to do better this year. Unfortunately, that did not happen as we lost our semi-final against North Harbour in five sets. While we were really disappointed that we wouldn’t have the chance to play for gold, we worked hard together and played a tough five-setter against Waikato to seal the bronze medal.

I am now excited to be playing in the East Coast Old Boys team along with Campbell for the National Club competition. We are playing in a local Waikato/Bay of Plenty league to see who qualifies to go to Nationals. It’s a bit stressful as I am playing with adults as well as older school boys, but I am learning heaps and I’m excited to get on the court with them. I also have a NZ Māori training camp coming up in Mount Maunganui.” 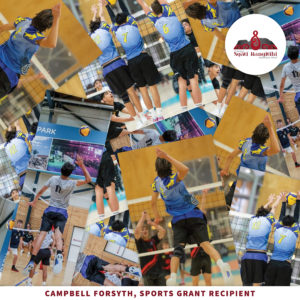